Belgian inventors not slowed down by pandemic 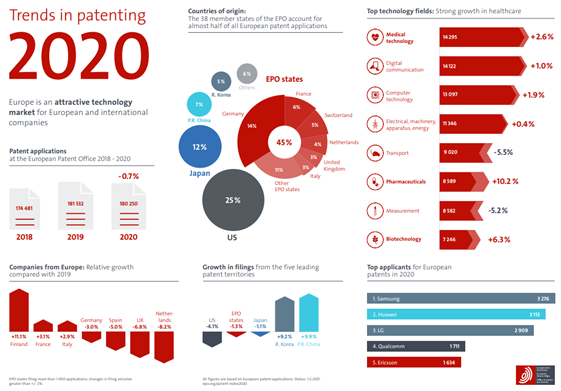 The coronavirus has drastically changed our lives and one might expect this would affect how many inventions are done. Some have not been able to work at all, and for those who work from home valuable interaction between each other has been decreased.

The conversations at the coffee machine or water cooler that may otherwise spark inspiration are gone, brainstorm sessions are shorter, and we do most work alone at home with less feedback from colleagues. The European Patent Office (EPO) has now published its annual Patent Index with the statistics regarding European patent filings at the EPO in 2020. The trend of the previous years with a yearly increase in patent filings has been broken, but despite the pandemic the overall number is only down by 0.7% in comparison to 2019. However, the statistics depend largely on technology or country.

Not surprisingly, the technical fields that saw an increase in patent filings include pharmaceuticals, biotechnology and medical technology, while one of largest decreases can be seen in the transport sector. These numbers seem to reflect to economic reality during this crisis. The patent filings in digital communication and computer technology keep increasing as well, making these the second and third most active fields, respectively, after medical technology. The firms filing most patent applications at the EPO are recognizable names from these fields, namely Samsung, Huawei, LG, Qualcomm and Ericsson.

Although firms from Europe and the USA filed less patent applications in 2020, these remain by far the two largest groups of applicants, followed by the Japanese applicants who also saw a small decrease. Another trend can be seen for Chinese and South Korean applicants, who show the greatest growth in 2020, apparently not largely affected by the pandemic. Big differences are visible within Europe. Germany remains the biggest contributor of patent applicants by a landslide, despite a 3% decrease. Whereas the Netherlands and the UK witnessed a large decrease in patent filings in 2020, relatively large increases were seen in France, Italy, Finland and Ireland.

The Belgian inventors do not seem to be affected too much by the pandemic. The patent filings at the EPO have only decreased by 0.9%, making the total number for 2020 the second largest ever. With 2400 European patent applications, Belgium holds the eight place in applications per million habitants and the fourteenth place in absolute numbers. About 66% of these patent filings originate from Flemish companies, but the absolute number decreased while numbers in both Wallonia and Brussels increased 2020. The top applicants have been the same names for several years now, including Solvay, Imec, Umicore, Agfa-Gevaert, KU Leuven and Universiteit Gent.  New in the top 10 is Ontex in eight place, who started production of mouth masks during the pandemic.