Satan Shoes: Nike at war with the devil 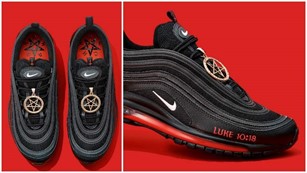 Famous sportswear brand Nike Inc filed a lawsuit with the US District Court for the Eastern District of New York against a small Brooklyn based company MSCHF over its sale of 666 pairs of modified Nike Air Max 97 “Satan” shoes in collaboration with controversial rapper Lil Nas X.

The by-now infamous “Satan Shoes” were launched by MSCHF (appropriately referring to “Mischief”) on the 26st of March and sold out in just one minute. These controversial sneakers are made out of black Nike Air Max 97’s, modified with decorations referring to satanism. Pentagram signs, commonly associated with satanic imagery, are added to the laces and the inside of the shoes. The side of the shoes are decorated with red embroideries stating the satanic numbers “6/666” and the quote “LUKE 10:18”, referring to a Bible verse mentioning the devil. To top it off, MSCHF added red ink mixed with a drop of human blood to the midsole.

MSCHF refers to itself as a conceptual art collective, criticizing the system through unexpected mediums. MSCHF now claims the Satan shoes are art and a criticism of collaboration culture, however part of the public perceived the Satan shoes very differently. Confused consumers, thinking the Satan shoes were made by Nike itself, took to social media to express their outrage. Christianity and a sneaker collaboration with a gay black rap artist are – unsurprisingly – a sensitive topic in the US.

Last Monday, only 3 days after the launch of the Satan shoes, Nike took action and filed a lawsuit against MSCHF, claiming trademark infringement and asking the Court to order MSCHF to permanently stop fulfilling orders of the Satan Shoes.

Although the devil-teamed shoes indeed bear Nike’s famous “Swoosh” trademark, this is not a clear-cut trademark infringement case. As MSCHF legally purchased the Air max 97 sneakers from Nike, they are allowed to modify and resell them. However, Nike’s lawyers argue that in this case it is inevitable that consumers will believe Nike is the source of the Satan shoes, which would harm Nike’s reputation and goodwill. Consequently they claim trademark infringement, false designation of origins, trademark dilution and reputational damage under US federal law.

A key element in Nike proving likelihood of confusion and reputational harm are in fact consumers’ reactions on social media. Consumers are expressing their outrage about Nike’s apparent association with Satan and call for a boycott of the brand based on the mistaken belief that Nike has produced, authorized or approved this product.

Where these arguments may be difficult to counter when it comes to the claim of reputational damage, when it comes to Nike’s claims of trademark infringement (due to likelihood of confusion), there are some valuable counter arguments for MSCHF to make. First of all, apart from the Swoosh logo – which was already part of the sneakers MSCHF bought from Nike, there are no other indications of a collaboration with Nike: the words “MSCHF” and “LIL NAS X” are embroidered on the backside of the shoes, referring to the collaborating designers of the shoes, and the pentagram sign in the inside of the shoes states “NAS X”. Furthermore, the accompanying shoebox and label only refer to MSCHF and Lil Nas X as well and the shoes can only be bought on the MSCHF website. Besides, the price of the sneakers (1018 USD, a reference to the Bible passage Luke 10:18) will make the consumer very attentive and thus less prone to confusion.

An important question for the Court will thus be: who is the relevant consumer? The “sophisticated sneakerhead”, as MSCHF’s lawyers claim, who are the consumers who actually buy this product, who will not believe these shoes are affiliated with Nike and who, rather than wearing these shoes in public, will display them as art? Or is the relevant consumer the general consumer where Nike’s lawyers refer to: the consumer only reading the headline of a social media post and jumping to the conclusion that Nike condones satanism? And is confusion in this case caused by the commercialization of the Satan shoes or rather by the domino effect of uninformed or incomplete social media posts and comments?

On the 1st of April the Court took a preliminary decision accepting Nike’s trademark infringement claims (at first sight) and ordering MSCHF to temporarily stop all sales of the Satan shoes. This is somewhat of a pyric win for Nike however, since all 666 Satan shoes have already been sold and shipped and MSCHF’s lawyer stating “There are no more shoes”.

We didn’t do it

As the case moves forward, we will learn whether the Court will stick with it’s preliminary findings. Both the timing of this lawsuit – very soon after the launch of the Satan shoes – and the fact that actual damages might be rather low, suggest however that Nike has already got what it wanted most: The lawsuit and the surrounding media attention made very clear to consumers that Nike is not associated with, nor condones, Satan shoes containing human blood. A PR disaster avoided.